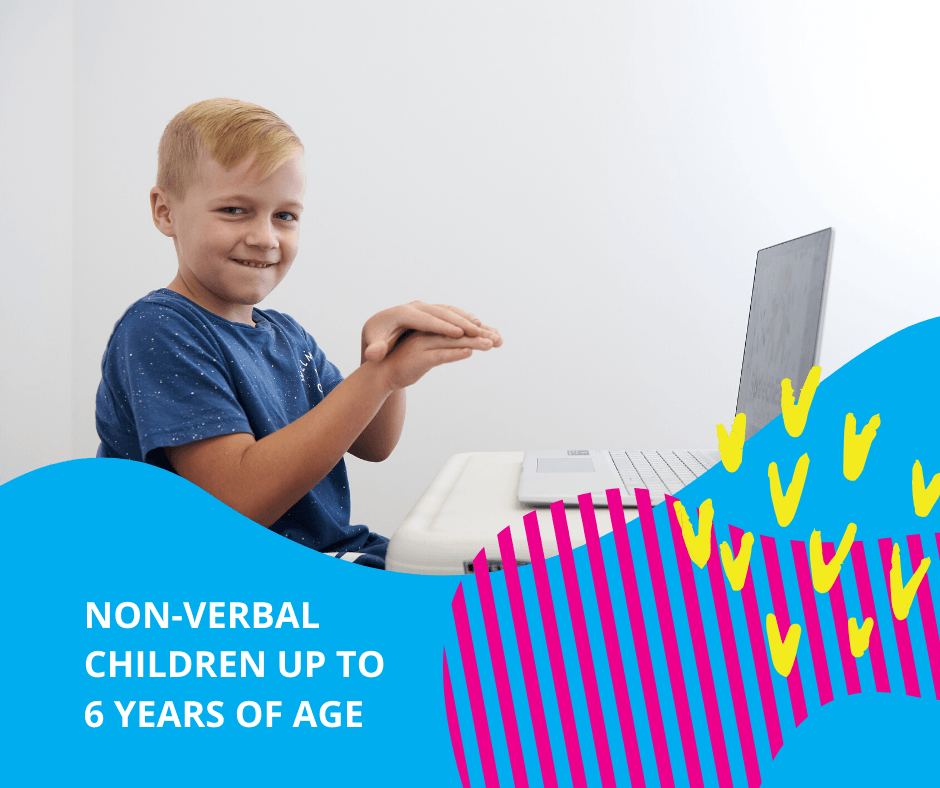 Communication is bigger than speech, though. You can help your non-verbal child communicate in many ways, using gestures, signs, assistive technology and words.

Parenting a non-verbal child can be frustrating and distressing but don’t give up hope – many kids do learn how to communicate more clearly and there are some key ways to help at home.

Non-Verbal Children up to 6 Years of Age

There’s usually a moment, near a child’s first birthday, when they delight their family by speaking their first clear word. Hearing those goo-goo-ga-ga babbles turn into a recognisable attempt at ‘Mamma’ or ‘Dadda’ is a special moment for many parents.

But what happens when the moment doesn’t come?

At first you probably reminded yourself that children develop at their own pace and some begin speaking later than others. Then, when faced with a non-verbal toddler or non-verbal child, you probably went to see a doctor to find out why. Eventually, you were told that your child has a condition affecting their ability to speak. You may have known about this since they were very young (at birth, even) or you may still be processing the news.

Your child is a wonderful, special person with their own unique personality. They will be trying to communicate in various ways. And there are many ways you can help, which will be explained below. But first, let’s look at the reasons some children may be non-verbal and understand the difference between communication and language.

Why Is My Child Non-Verbal?

There are many conditions that can affect a child’s speech. Some common ones are:

The Difference Between Communication and Language

We communicate in many different ways and for different purposes. We might use words to communicate or we might use other tools like facial expressions or body language. We might blow a kiss to demonstrate affection, pull a face to express our dislike of cabbage soup, make eye contact to share a private joke, or point to indicate a certain place.

Language, on the other hand, relies on words, whether they’re spoken, written down or signed. Your child may learn how to use some spoken language. Many children with non-verbal autism, for example, do prove capable of speech. One study of over 500 children aged 8-17 with severe language delays due to autism found that nearly half became fluent speakers and two-thirds learned how to speak in simple phrases.

Even if your child doesn’t gain language skills, they can still be helped to communicate using Augmentative and Alternative Communication. This might be aided by software or objects, or might be unaided, relying tools like eye contact, facial expression, signs and gestures.

How Can I Help My Non-Verbal Child to Communicate?

Think of your child’s communication skills like a staircase. They are not likely to leap from the bottom step to the top. Instead, the goal is to start where they are now and move them up a step at a time. They may not reach the top, but they will have made progress.

Here are some strategies to encourage communication with your non-verbal child. As mentioned above, there are many conditions that can hinder children’s speech. This advice is of a general nature only, but may still be beneficial in the run-up to seeing a speech pathologist.

You can encourage your child’s non-verbal communication by modelling it yourself. Use expressive hand gestures, clap to give praise, point to the toy when you say ‘There’s your bear’, shake your head when you say ‘No’ and nod it when you say ‘Yes’.

Talk to your child often. Not an endless stream of pointless chatter but a deliberate effort to use certain simple words and phrases when interacting with your child.

When you’re playing together, add in some descriptive words like, ‘Here is the red duck. Here is the blue duck’. Or play sorting games where you organise things by size (big or little) or colour. You are adding to their language bank each time.

Imitation may be the sincerest form of flattery but it’s also a great way to interact with a non-verbal child. If your child makes a noise, then copy them and make a new noise of your own. Maybe they’ll copy yours. It’s the beginning of a wordless communication using sounds.

In any conversation, people take turns speaking and listening. Because communicating with a non-verbal child can be slow and frustrating, there’s an easy temptation to rush on and fill the gaps for them. Try to take a few deep breaths and wait for their response, whatever it might be. If you’ve asked, ‘Would you like an apple?’ they might, in time, nod or point to the fruit bowl or shake their head and open the fridge to get a yogurt.

5. Make the Most of Technology

One of the wonders of the digital age is the way it enables people with language difficulties to communicate and deepen relationships with others.

Assistive technology may help a non-verbal child express themselves – and you may be surprised at what they know and how much they want to say! Your persistent descriptions, games and non-verbal communications may mean they do in fact know their colours or can reveal a cheeky sense of humour.

If your child has an NDIS Plan, it may include funding for assistive technology. If it doesn’t, and you think it would be beneficial, then you may be able to get it included in next year’s plan.

It is a great joy to watch a child learn how to express themselves and connect with others. The main message, really, is not to give up hope. Many children do learn to communicate, whether that’s using speech, assistive technology or other communication methods. We don’t yet know your child’s communication potential but we look forward to helping your family make progress to easier and deeper communication.

Surprise Speech! 4 things you might not know about a Speech Therapist’s role
05/07/2019